There is no better place within a university to study and concentrate than the good old library, right? But some educational institutions really excel in this regard and offer their students a jaw-dropping structure, including visually. With that in mind, we decided to create our list of the most beautiful university libraries in the world.

Of course, there are hundreds of incredible university libraries scattered around, but to make this list fairly we consider libraries from different countries, architectural styles and historical periods. Check the result below!

Central Library of the National Autonomous University of Mexico (UNAM)

The UNAM Central Library in Mexico City is part of a group of unique architectural structures that contributed to the institution’s campus, which is the best in Mexico, to be recognized as a UNESCO World Heritage Site in 2007.

In contrast to most other buildings on campus, the library is an imposing square-shaped structure, adorned with various murals painted by the famous muralist Juan O´Gorman. The height, shape and artistic design of the building sets it apart from the rest. The building was completed in 1956 to receive the library that was previously in the center of the city and today houses about 400 thousand books.

The Rare Books Thomas Fisher Library University of Toronto is home to the largest collection of historical books and public access Canada. The library’s collection is formed, for example, by religious manuscripts, innovative scientific documents, political writings and exquisite engravings from the 17th century.

Some of his most notable plays include originals by Shakespeare, a copy of proof from the book Origin of Species by Charles Darwin and two copies of the Nuremberg Chronicle, dated 1493. The collection is also composed of fragments of Egyptian papyrus manuscripts, Hebrew documents and Jews and 25,000 publications that were part of the collection of Robert S. Kenny, a noted member of the Communist Party of Canada. 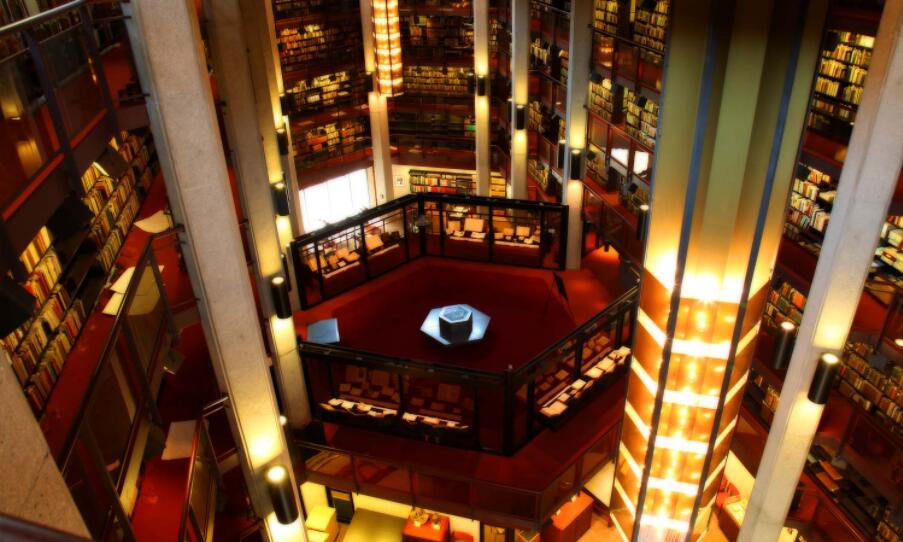 The Library at Tama University of Art in Tokyo, Japan, was designed by renowned Japanese architect Toyo Ito and is an iconic concrete and glass structure divided into two levels. What is striking is that while the exterior of the building resembles a cube-shaped Colosseum, the interior, with its vaulted ceiling and hundreds of arches, resembles a large medieval European cathedral. 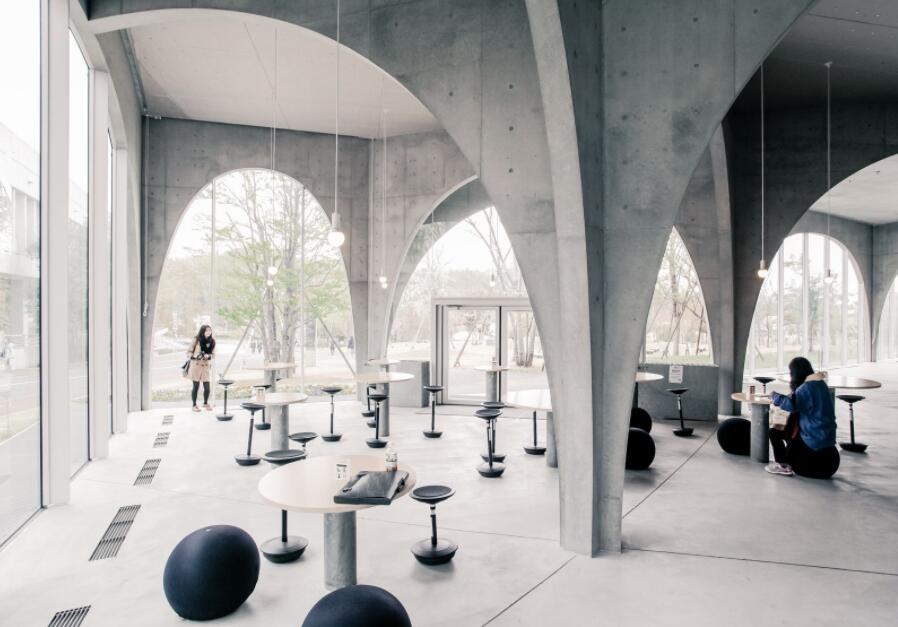 Philological Library of the Free University of Berlin

The design of the Philological Library of the Free University of Berlin, in Germany, is certainly one of the most innovative on this list. The building was built in 2005 by architect Norman Foster and was immediately dubbed the “Berlin Brain”. Guess the reason? You got it right if you thought the library was built in the shape of the human brain! With more than 700,000 volumes spread over four floors, this is one of the biggest architectural landmarks in the German capital. 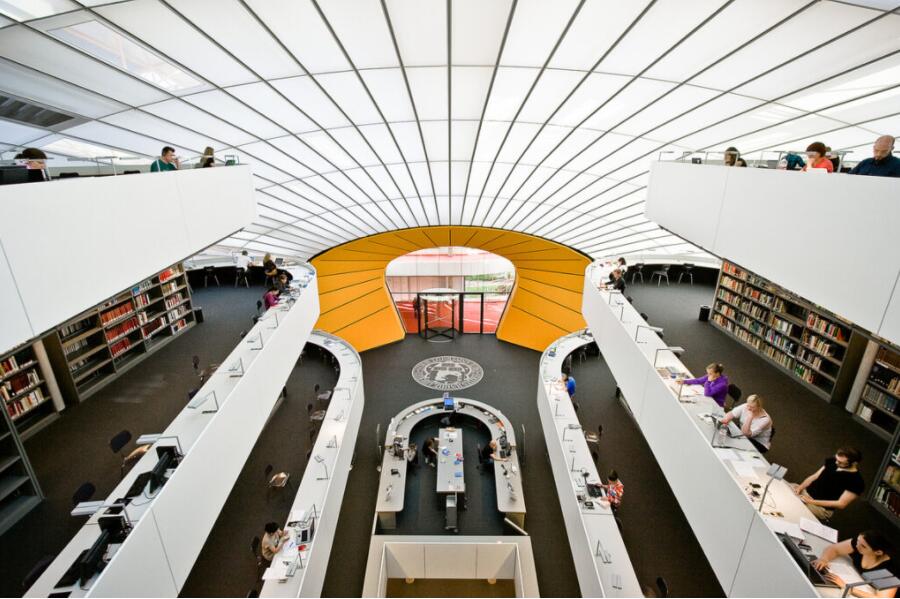 Library of the University of Salamanca

Located in the heart of the historic center of the university, the Library of the University of Salamanca is one of the most iconic in all of Spain. The old library, built in the 15th century, featured the famous painting “El Cielo de Salamanca” on the ceiling.

Although most of this painting collapsed during the reconstruction of the library in the 18th century, some remained hidden for almost 200 years behind the roof of the new structure. The painting was restored and transferred to the university museum. Today the library has more than 160,000 volumes, many of which date from the 11th century. 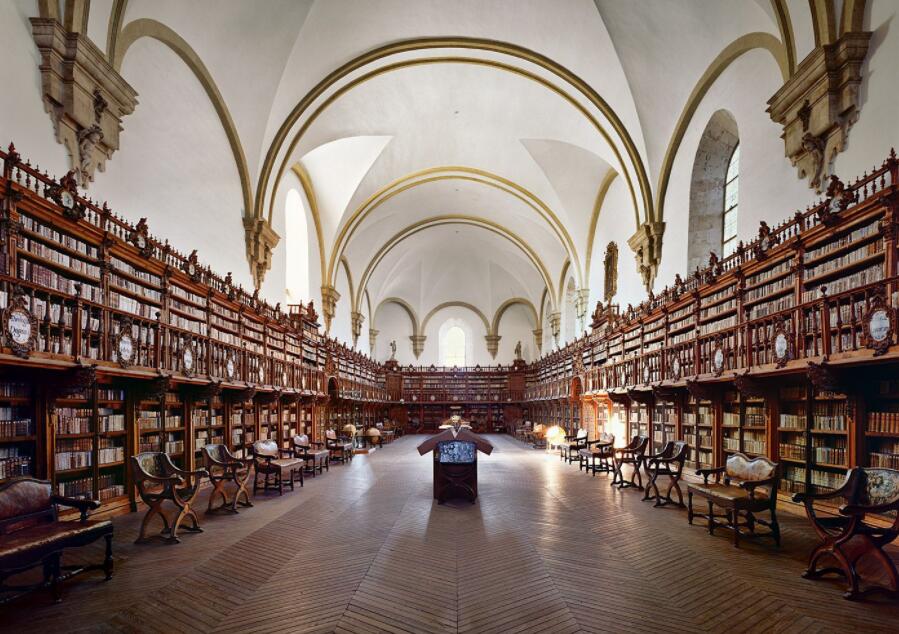 In Baroque style, the historic building contains more than 200,000 books printed before 1800 and has exquisite architecture with three large rooms, ornate arches, lots of wood and several golden details. The coat of arms of King João V, its founder, is displayed over the entrance door. 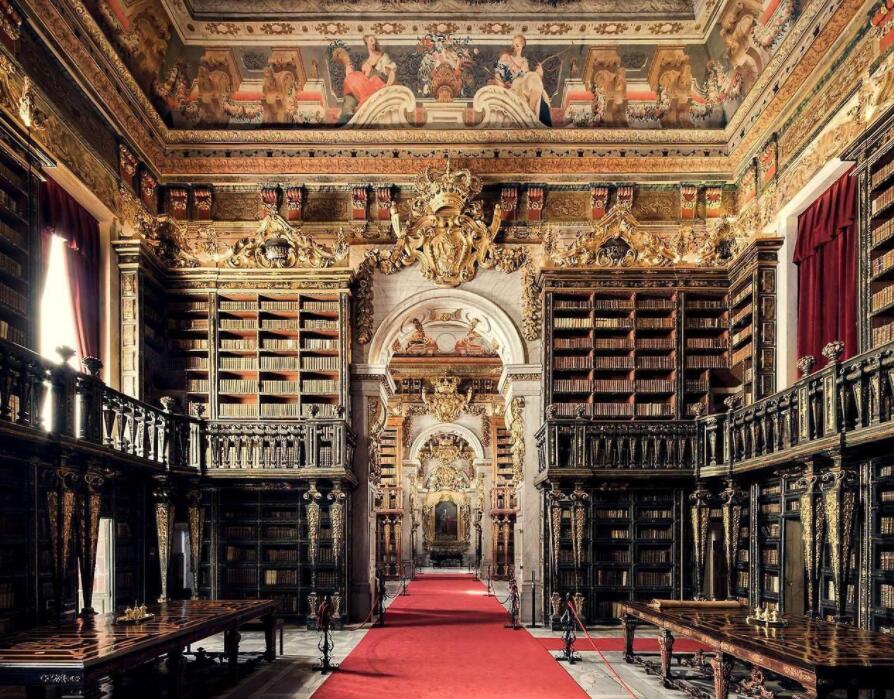 Rising at a height of more than 30 meters, the eight floors of the Geisel Library form a cylindrical body at the base of a gorge. The widest point in the library, at ground level, measures 75 meters. The widest point above the ground is the sixth floor.

The lower two levels act as a pedestal for the incredible six-story tower. The architect William Pereira, who designed this unique structure, made it clear from the beginning of the work that any subsequent addition to the building’s structure could cause it to fall down the gorge! 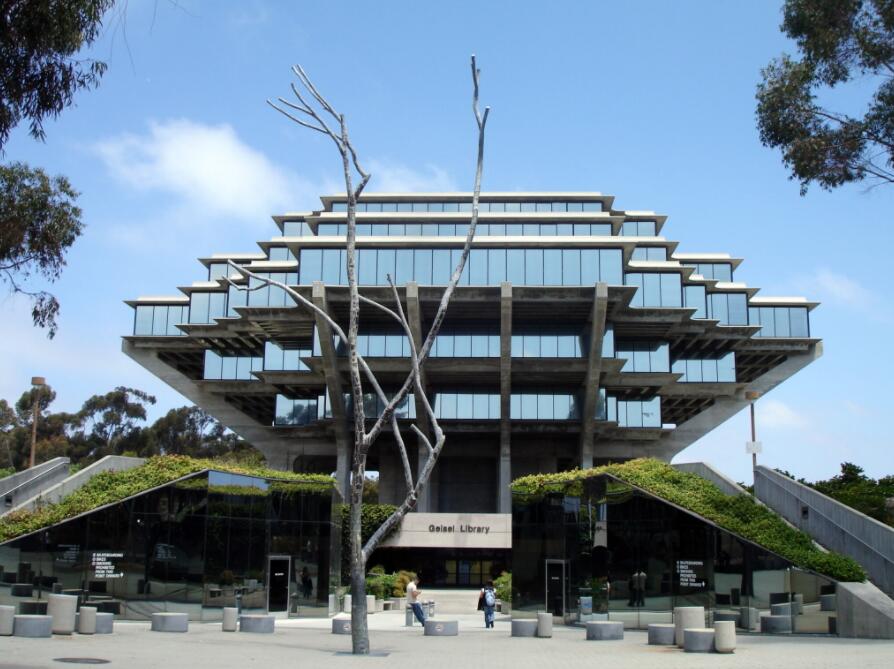 Named in honor of Lord Brotherton, who contributed greatly to its construction, the Brotherton Library at the University of Leeds, in the United Kingdom, was opened in 1936. The building, designed by the company Lucas & Lodge, had as its initial objective to be accessed through the Parkinson building, another important university building in front of you.

That is why its exterior is very simple, only covered with red bricks, since the idea is that it would not be visible. The delayed construction of the Parkinson building, however, left the exterior of the library completely exposed for almost 15 years.

Stories aside, the great highlight of this library is its interior, formed by a huge dome, an impressive iron baluster and columns of green Swedish marble. The contrast of the dull exterior with the splendid interior is the great charm of this library. 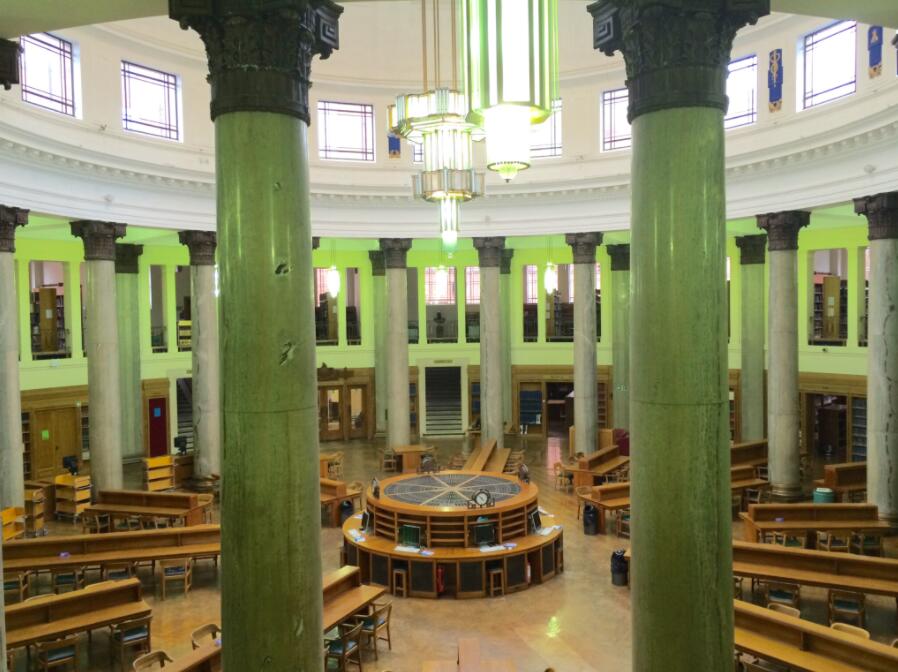 The George Peabody Library at Johns Hopkins University , USA, was created by successful businessman and banking tycoon George Peabody. Until 1982, the library was part of the Peabody Institute in Baltimore. The luxurious neogrego building was designed by the famous architect Edmund Lind in 1857 and is often used as a banquet and gala venue.

The building houses more than 300 thousand volumes that cover a wide variety of topics. Most of the rare books in the library date back to the 18th and 19th centuries. However, there are also cuneiform tablets from Mesopotamia, some of the first printed books in history and a peculiar collection of editions of Don Quixote. 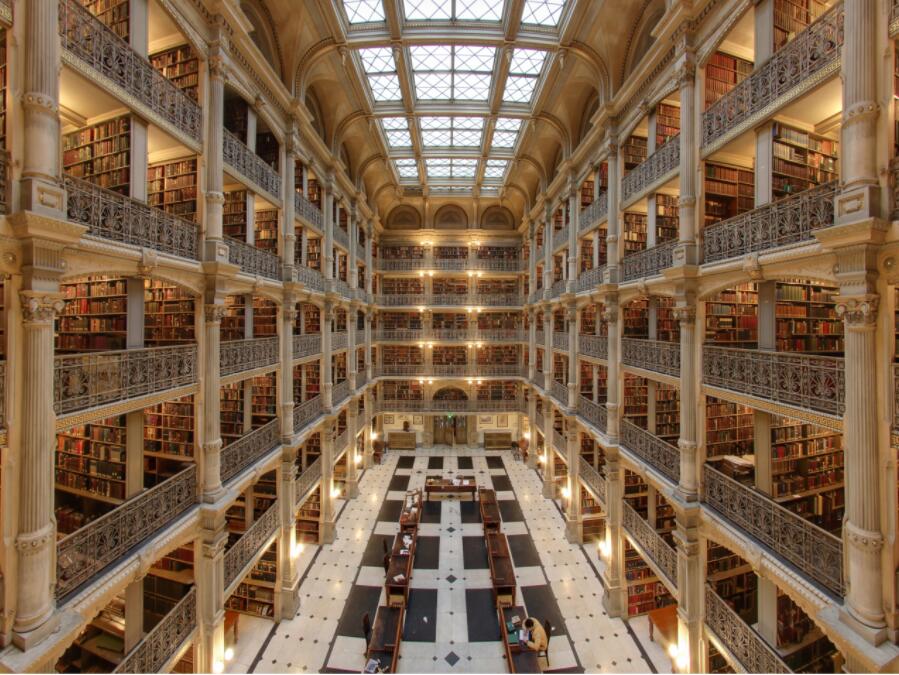 The original building of the Library of the Catholic University of Leuven, Belgium, was built in the first half of the 19th century. However, during the First World War, in 1914, the library was looted and destroyed by German troops. A new building, designed by American architect Whitney Warren, was built between 1921 and 1928 and reflects a neo-Flemish-Renaissance architectural style.

As one of the largest university structures in the region, the size of the tower serves as a representation of the victory against Germany. In 1940, the building was burned again in the second German invasion and was rebuilt according to Warren’s designs. 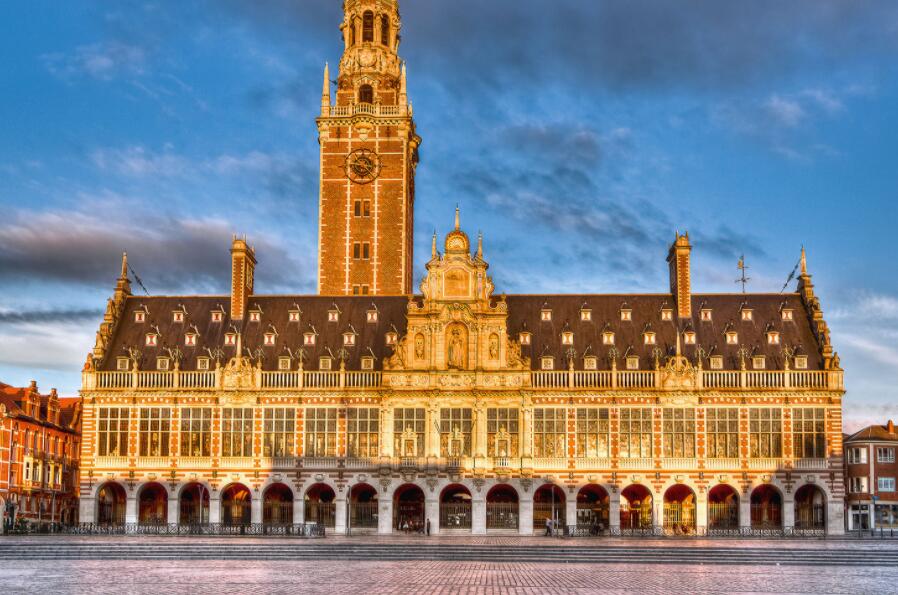 The Library at Trinity College Dublin , Ireland, is famous for its history, its marble busts and its collection of 200,000 books, most of them old. Built in 1712, the space underwent a major renovation in 1860 that raised the ceiling and created the upper level of bookshelves.

In addition to the marble busts lining the room, representing the notables of Trinity College and the great writers and philosophers of the world, the valuable treasures of the Long Room (the central passage of the library) include a 15th century harp and a rare copy of the Proclamation of the Republic of Ireland 1916. 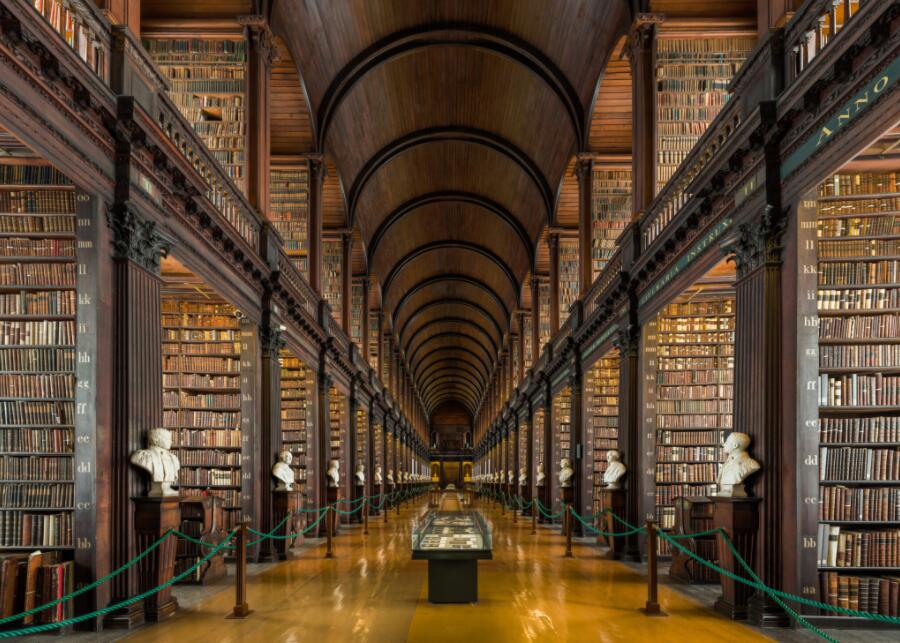 The Joe & Rika Mansueto Library at the University of Chicago, USA, is an architectural masterpiece created by architect Helmut Jahn. Built between 2008 and 2011, this impressive structure consists of an above-ground reading room, sheltered under a dome, and an underground area that serves as storage space for the library’s vast collections. The books are stacked in stainless steel boxes and handled by robotic cranes. 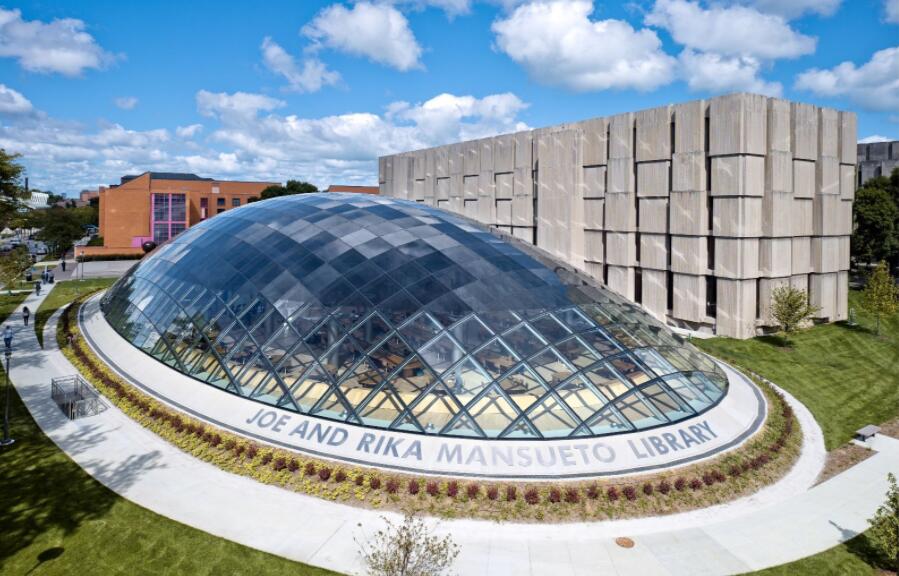 The National Library of Finland, formerly known as the University of Helsinki Library, is an excellent example of imperial style in Finnish architecture. Built during the 1840s, the library has a classic-looking facade and its roundabout, although it was only added later, today is one of its most striking elements. The building houses the national archive of Finland and most of the books are stored in underground shelters or in ordinary bookcases. 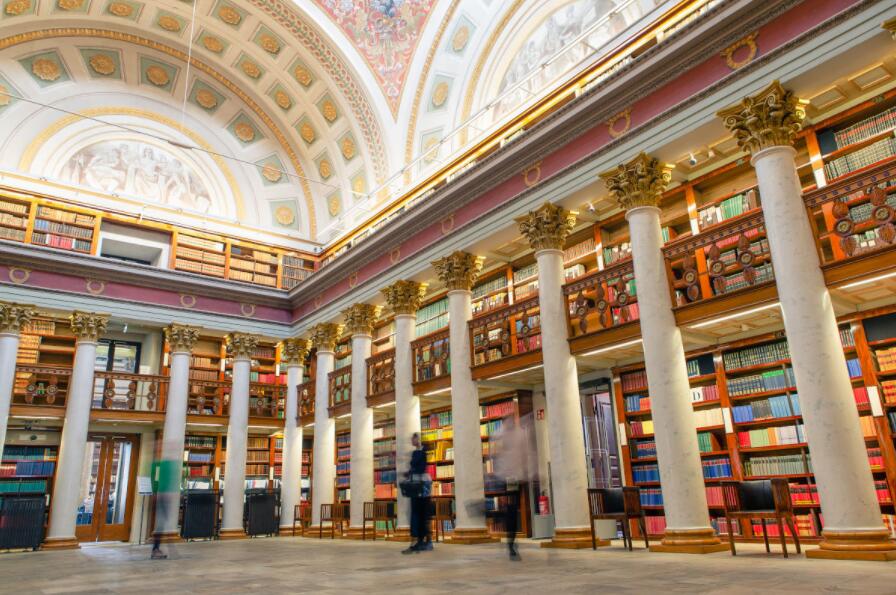